Welcome to..... Making a Statement!

This prototype was made in a single week for the #DevIdeaWeek jam. It isn't very pretty, and doesn't have a lot of polish. The main goal was to get the game concept working and playable so that future improvements to the format and balance could be discovered and hashed out. If people really like it, it could even turn into a full release some day!

First off, you will use the mouse and keyboard to interact with this prototype. Click on cards and buttons, type in letters for guessing/answering.

The goal of Making a Statement is to fill in the blanks of the word or phrase shown, in order to solve the puzzle. Each player starts with a hand of 3 cards which will allow you to perform various actions. Cards have an Energy Cost (the green diamond symbols). Every player starts every turn with 4 energy. Depending on how you play your cards, you may be able to take multiple actions in a single turn, or just one.

Here is the flow of a turn:

Every time a consonant is guessed, $100 dollars will be awarded for every blank in which it appears in the puzzle. No money is awarded for vowel guesses.

When choosing to solve the puzzle, if the solution is correct, $200 are awarded for every letter that was previously un-guessed upon the time of solving the puzzle.

This means that, unlike Wheel of Fortune, solving the puzzle as early as possible is the best strategy! As soon as you think you know it, hit that solve button. Be careful though, if you are not correct, your turn will be over even if you have remaining energy.

A game consists of 4 puzzles. Once you have finished all 4 puzzles, the player with the most money wins and the game is over. You can start a new game by pressing the button.

This prototype was made in 6 days total. It has not been extensively tested. It might be broken in numerous exciting ways, and I don't plan on fixing bugs in the near-future either so it is what it is!

You can play with Bot players. The Bots are not very smart, and barely try to apply any strategy. They will make really stupid guesses and play cards unstrategically. It would be better to play with a human friend or three!

Some of the puzzles in the data-set are not great. I sourced some of the puzzle data from lists on the internet, and attempted to do some curation of it, but there still might be weird answers that make you say "huh???"

I hope you enjoy playing Making a Statement, I would love to hear your feedback on how this could be expanded and improved upon if I ever decided to make a full release!

I think there's a lot of room for improvement, but I'll say up front that as a prototype, this is very good. :-)

I did two playthroughs of the game, with a bot opponent; not ideal, I know, but I'm home alone at the moment and wanted to see what it was like. Some things I noticed;

* It would be nice to have the letters guessed/unguessed visible even when not typing.  Knowing which consonants are already gone is a huge help in determining whether you want to guess a consonant at all, or do something else.  It's also a help when trying to work out the answer before committing to solving ("the second word could be MINERAL...wait, did we already guess E?").

* There's a weird disincentive to use the second action on your turn.  If you have four energy, and all of your cards cost two, then you'll, say, guess a consonant for your first action.  Then, you could guess another consonant and get maybe a couple hundred dollars--but it's giving a lot of information, and you won't have enough energy left to use that information!

That's especially true of "get the first letters".  When the bot used it, it lit up the grid with *S??I???????, I??I??IS*, which was easily enough to get ILLINOIS and, from that, SPRINGFIELD.  (There may have been another letter or two already revealed.)  So that's almost never going to be your best play, since it uses all your energy and probably gives away the answer for the next person.  (Unless you got lucky enough to get the bonus energy.)

It's a tough balance, and I think it's one of the reasons the Wheel-of-Fortune model actually works: there's always incentive to guess letters, because guessing letters can give you more money than just solving; and if you guess correctly, your turn doesn't end and you can spin to guess more.  (I almost wonder whether the right strategy is to never guess any letters, and just wait for your opponents to fill the board enough for you to guess the answer.  Of course, if everyone in the game does that...)

* I think there's opportunity for one-player mode, in which you lose money for making wrong guesses (maybe all guesses cost money?), and you try to maximize your money.

All of this is, of course, if you want to keep working on it.  If not, you can rest happy, knowing you made a very good prototype. :-)

I agree there's a ton of room for improvement. Showing the guessed letters during card selection is a great, simple piece of feedback that makes total sense.

Disincentive to use second action & the "reveal first letters" card would both be alleviated by a feature I had planned but didn't have time to implement, which is a button that would let you "burn" a card to get back energy. That way, if you had cards to spare, you could use a powerful card, and then discard a common one to get a chance to make a guess. That in itself might require some balancing too, but I think it would help.

As-is, the only time you'd really want to use the "reveal first letters" card is if you rolled the "Extra Energy" bonus at the start of your turn.

Anyway, I don't have any plans to work on this any more at least for the time being, got other projects to get back to, but if I ever revisit it in the future I'll definitely take this feedback into account!

This is amazing! It's a really fun concept, I kinda lost myself in time trying to solve the puzzles

that's great to hear! glad you had some fun with it 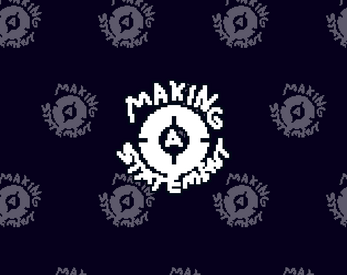